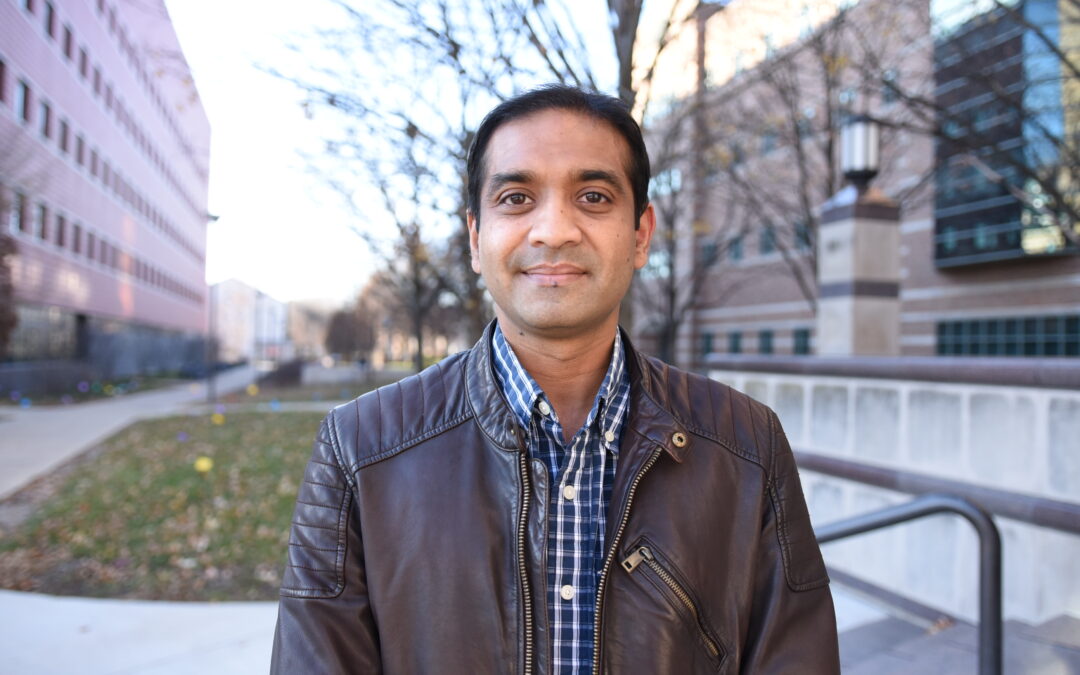 Bashar Emon, mechanical engineering Ph.D. student, is using the funding from his Cancer Center at Illinois Graduate Cancer Scholarship Program to focus on characterizing matrix remodeling in the cancer microenvironment. The rigidity of the cancer cells and their surroundings could influence risk of metastasis.

Emon is mentored by Cancer Center at Illinois (CCIL) scientist and professor of mechanical engineering, Taher Saif, and works in close collaboration with other CCIL scientists Rohit Bhargava, Prasanth Kannanganattu, and Kim Selting. These partnerships were initiated during Emon’s time as a former trainee in the Tissue Microenvironment (TiME) program.

“These labs are specialized in different disciplines, and as someone who mainly focuses on mechanical engineering, I need complementary methods from the other labs to supplement my weaknesses,” Emon said. “The labs combine to form a very solid team, and if I was working alone, I would never be able to achieve results.”

Emon’s research seeks to determine whether the increased stiffness of the tumor microenvironment is a side effect of metastasis or a vital player that contributes to metastatic risk. His preliminary research has shown evidence to suggest that stiffness plays an active role in cell behavior and how cancer cells perceive their environment as well as adjacent cells.

Cancer cells themselves are also affected by stiffness, but Emon focuses on the stiffness of the ECM, which is influenced by CAFs. Cancer cells change their own stiffness, becoming softer with time, whereas the ECM becomes stiffer, eventually prompting the CAFs to produce pro-metastatic factors.

“In the tumor microenvironment, there is a three-way cross talk between the ECM, cancer cells, and the CAFs: the cancer cells recruit CAFs by secreting proteins and influence them to remodel the ECM, making it stiff. The stiffer ECM then helps the CAFs to secrete growth factors that make the cancer cells aggressive, causing them to leave the environment and metastasize,” Emon said.

This research is mainly conducted with colorectal cancer (CRC), with some studies in lung cancer. The Saif lab has extensive experience with CRC, the third leading cause of cancer morbidity in the United States. Tumor microenvironments differ between cancer subtypes, but Emon believes the findings from his studies could be applied to many types of cancers.

Emon and collaborators have previously developed a sensor that measures ECM stiffness and cell force, which rises with increased stiffness and allows cells to become more contractile, facilitating metastasis. His current work focuses on using this sensor to answer basic scientific questions, including how cancer cells remodel the microenvironment to aid metastasis and the potential to treat cell force as a therapeutic target for minimizing metastatic risk. Future applications of the sensors could include a high-throughput system that determines optimal cancer therapeutic dosages for individual patients, enabling personalized care.

Emon plans to submit for a National Cancer Institute F32 postdoctoral scholarship with the aid of the CCIL’s Graduate Cancer Scholarship Program and aims to continue his research in academia after graduation.

The Tissue Microenvironment (TiME) program is a university-wide training program for graduate students, supported by a T32 grant from the National Institutes of Health. Click here to find out more.