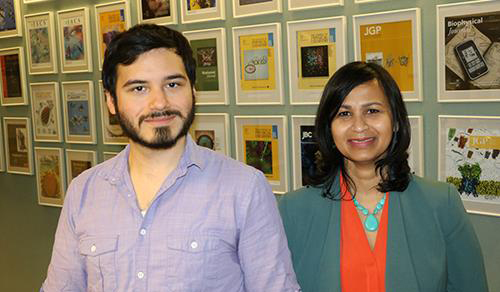 Image of William Arnold, a graduate student in biochemistry, and Aditi Das, an assistant professor of biochemistry and bioengineering graduate program.

There are many anti-cancer therapeutics that are effective at killing cancer, but some can have serious side effects, eventually causing heart attacks.

Illinois researchers are studying the cardiotoxicity of doxorubicin (DOX), one of the most commonly used chemotherapeutic drugs. It’s also one of the oldest in its class, known as anthracyclines, and is considered an “essential drug” by the World Health Organization.

A paper published in Biochemistry, “Arachidonic Acid Metabolism by Human Cardiovascular CYP2J2 is Modulated by Doxorubicin,” outlined the findings about a new mechanism of doxorubicin cardiotoxicity. It was named an exemplary paper in its field by peer review service F1000 Prime, earning the designation of a “recommended article.”

“Doxorubicin can be very effective at attacking the cancer,” said Aditi Das, an assistant professor of comparative biosciences, of biochemistry, and of biophysics; graduate program faculty member in Bioengineering; and member of Beckman’s 3D Micro- and Nanosystems Group. “However, patients undergoing doxorubicin treatment can reach a lifetime cumulative dose that becomes cardiotoxic.”

“By figuring out what causes the cardiotoxicity, pharmaceutical companies can design better and better analogs that don’t harm the heart,” Das said.