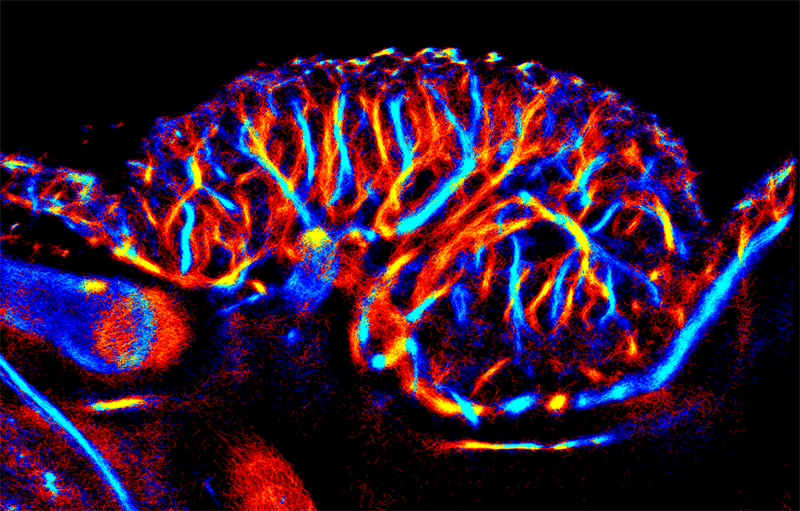 More than 75 years after the Fry brothers arrived at Grainger Engineering, the university’s leadership in medical ultrasound research continues. Teams across campus are refining the tools, software, and techniques that constantly improve the performance of this critical healthcare technology.

Mammography is the current state-of-the-art method for detecting and diagnosing breast cancer. But it doesn’t detect certain types of cancer. Professor Mark Anastasio, who is head of the Department of Bioengineering, and colleagues at Wayne State University are developing a method known as ultrasound computed tomography  (USCT) to improve the detection and management of breast cancer. USCT is similar to x-ray computed tomography in that it can create cross sectional images of three-dimensional tissue but uses ultrasound waves instead of x-rays to probe tissue.

“The current methods of mammography or tomosynthesis are based on x-rays. Some small early-stage cancers, especially in younger women, are difficult to detect in such images, so the industry understands the need for improvement,” said Anastasio, an expert on computational imaging science and a Donald Biggar Willett Professor in Engineering.

“Not only is USCT safer because it doesn’t involve ionizing radiation, it is more sensitive to certain tissue properties that will make it easier to detect subtle breast cancers.”

The study is funded by the National Institutes of Health.

Currently, it can take up to a few months to identify if a cancer treatment is working. Professor Michael Oelze and his team are out to change that, so that detectors can get an indication of positive impact in as little as a week. Oelze is part of the Department of Electrical & Computer Engineering and the Carle Illinois College of Medicine, as well as the Cancer Center at Illinois.

The project aims to identify the early response of breast cancer patients to neoadjuvant chemotherapy using quantitative ultrasound imaging technology. It includes collaborators from the Sunnybrook Health Sciences Centre in Toronto, and it is supported by the National Cancer Institute.

Clinical ultrasound is limited when attempting to distinguish between subtle vascular changes. Collaborations between researchers from Grainger Engineering and Mayo Clinic are developing a new ultrasound technique to generate high-resolution microvascular images using microbubbles surrounded by a lipid membrane.

Normally, human vasculature is very ordered, but cancers tend to grow with a chaotic network of blood vessels that feed the fast-growing tumor. Imaging vasculature is useful for diagnosing patients with many types of cancer and for determining whether the patient is responding or resistant to their current therapy.

“Cancer is the immediate application that would benefit from this technique because we know angiogenesis is an important biomarker throughout almost all phases of cancer…We can talk about detection, diagnosis, and therapy response and evaluation. The best part is we can immediately image cancer patients using the new technique. We use FDA-approved microbubbles that are already widely used in the clinic” explained Professor Pengfei Song, who is part of the Department of Electrical & Computer Engineering, the Cancer Center, and Beckman Institute for Advanced Science and Technology.

This article originally appeared in the Spring 2022 issue of Limitless magazine, produced by the Grainger College of Engineering.