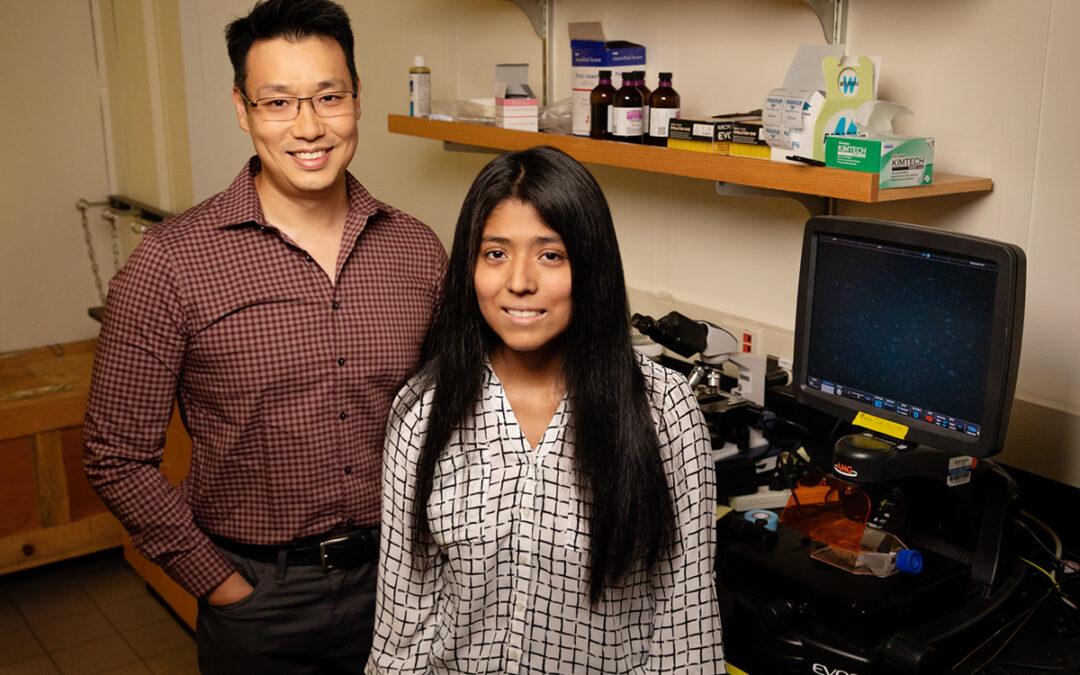 Urbana, Ill. – Lung cancer can be elusive to spot and difficult to treat because the markers for it are found in other tissues, too. Now, University of Illinois Urbana-Champaign researchers have developed a finely tuned molecular agent that can target lung and other cancer cells for imaging and treatment.

In a paper published in the journal Nature Chemistry, the researchers described the molecule’s ability to target lung cancer cells, image them and deliver targeted treatment in cultures of human cancer cell lines as well as in live mice.

The researchers picked a surprising biomarker to target: glutathione, a molecule naturally produced in tissues throughout the body but expressed in greater quantities in lung cancer. Because of its ubiquity, they said, it has not been a good target for treatments such as chemotherapy.

“One of the biggest issues with developing diagnostic tools or targeted drugs is off-target effects,” said Illinois chemistry professor Jefferson Chan, who conducted the study with graduate student Melissa Lucero. “When you give a patient a chemotherapeutic, it’s kind of an arms race: You’re killing the cancer cells, but you’re also killing the rest of the body because so many things are similar. We used a unique chemistry approach to tune the reactivity of our molecule, so that we’re targeting what would typically be considered a bad biomarker.”

A new molecular agent can seek out elusive lung cancer cells for imaging and targeted treatment. The same approach could be used to develop agents to target other cancers, further broadening the public impact of this research.*

The researchers tuned the dynamic range of the molecule so that it would not react to glutathione under healthy conditions but would react with the excess glutathione made by cancer cells.

The researchers paired their targeting molecule with an agent for photoacoustic imaging, so that they could see where it was reacting and verify that it was targeting the lung cancer. The imaging agent responds to light and gives off an acoustic signal that can be picked up by an ultrasound transducer.

“It’s a light-in, sound-out technique. It has a lot of advantages over traditional medical imaging. This imaging is powerful because of its resolution, its safety profile and its ability to interact with these designer molecules that tell us so much information at the molecular level,” Chan said. “There are hand-held and laparoscopic light devices that seamlessly integrate with ultrasound machines in hospitals, so we know when we develop molecules like this there are clinical applications.”

The researchers first tested the new molecule’s imaging capabilities in cell cultures and found that it distinguished between healthy and cancerous cells. To gauge the diagnostic potential, they performed a blind study in live mice, using the photoacoustic probe to identify which mice in a cohort had lung cancer tumors. This study marks the first time that photoacoustic imaging has been successfully applied in lung tissue, Lucero said.

Then, the researchers explored whether their targeted approach could be used to deliver treatment directly to the site of cancer cells, which would eliminate the biggest drawback of chemotherapy and other cancer treatments: toxicity to the whole body.

They created a prodrug, dubbed PARx, that combines their targeted imaging probe with a powerful chemotherapy drug and tested it in the mice. They found that PARx inhibited tumor growth, without the mice displaying signs or symptoms of off-target toxic effects such as weight loss or liver damage. In contrast, a group of mice that received a control instead of the drug had significant tumor growth over the three-week treatment course.

“We found we could use high doses or frequent doses of the drug with no off-target effects,” Lucero said. “Then we did some more experiments in other clinically relevant mouse models, finding and treating cancer that had metastasized to the liver as well as primary tumors, which shows the potential for broad application of this approach.”

Next, the researchers are working to improve the selectivity and detection capabilities even further so that they can detect micro-metastases, or tiny clusters where the cancer has spread, anywhere in the body. They are also looking to apply their approach to other biomarkers, creating fine-tuned targeting molecules for other cancers.

“When you’re targeting a disease like lung cancer, something that’s a death sentence for a lot of people, you know it should be possible to diagnose it at an early stage, before symptoms manifest, by simply going after the right biomarker,” Chan said. “Now we have the first steps to be able to diagnose it, and also there’s hope for treatment, because by using chemistry, we can counter the toxicity of these drugs and actually make them safe for general application.”

The National Institutes of Health supported this work. Chan also is affiliated with the Beckman Institute for Advanced Science and Technology at Illinois.

The paper “Photoacoustic imaging of elevated glutathione in models of lung cancer for companion diagnostic applications” is available online.

*This is an example of Public Impact Research.