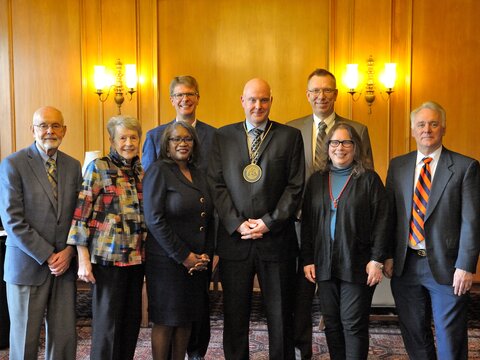 Known for ground-breaking research blending chemical and biological approaches to address antibiotic resistance, professor Douglas Mitchell was celebrated as the John and Margaret Witt Professor of Chemistry during an Investiture ceremony on the Illinois campus.

During their individual remarks, Mitchell and alumnus John Witt (PhD, ’61) both emphasized the opportunities they have had at Illinois and the impact their advisor-student relationships have had on their careers.

“It has been a real pleasure and a satisfaction to have been educated here, trained here, nurtured here, encouraged here, and then be sent on my way,” said Witt, who went on to work at the J.D. Searle pharmaceutical company, where he helped launch the NutraSweet division. After retiring from NutraSweet, Witt founded Witt Science Consulting, advising small pharmaceutical and venture capital firms in developing new drugs.

Witt noted the important influence his PhD advisor, Harold Snyder, had on him as a student as did other Illinois chemistry professors: Herb Gutowsky, Paul Lauterbur, E.J. Corey, John Bailar, and C.S. Marvel.

And Mitchell thanked his current and previous graduate student researchers in the Mitchell Lab.

“It’s been a real privilege to work with some of the brightest and most creative minds. Working with you in the capacity that I do is the whole reason I wanted to become a professor,” Mitchell said. “We don’t pursue questions that are of little significance. And I make no secret of the fact that when we embark on these things, I learn as much from you as you do from me. So, what an interesting and remarkable symbiosis this is, the advisor-advisee relationship.”

Mitchell joined the Illinois faculty in 2009 as a professor in chemistry. He’s also a professor at the Carl R. Woese Institute of Genomic Biology and an affiliate in microbiology.

For their mentorship, Mitchell thanked chemistry professors Paul Hergenrother and Wilfred van der Donk, who spoke during the Investiture, describing Doug as a “topnotch researcher and a devoted teacher and mentor.”

“Doug’s laboratory has very successfully developed new modern methods to discover new natural products based on genomic information and those molecules, of course, could be our future antibiotics,” van der Donk explained. “And in this current pandemic, we are reminded how important it is for us to have molecules that can fight infectious diseases. His group has also contributed landmark discoveries to help our understanding of how nature makes these molecules in the first place. And he has developed technologies to engineer these compounds for new functions that are valuable to mankind.”

Those discoveries include lasso peptides — an unusual sequence of amino acids that forms a loop with its tail threaded through the loop like a lasso. The biosynthesis and bioengineering of them holds the potential to contribute to the development of stable peptides as drug leads and has led to a startup called Lassogen that is developing lasso peptides as a new therapeutic modality.

Mitchell has also developed a new computational discovery tool, Rapid Open-reading-frame Description and Evaluation Online (RODEO), which facilitates the discovery of natural products and is publicly available to other researchers.

The Witt professorship, established in 2013, will provide additional discretionary funds for Mitchell to turn his ideas into reality. In 2018, the Witts received the LAS Dean’s Quadrangle Award for their service and generosity to the college.

“One of the core beliefs I have is when you walk out of here with a degree, you not only have a degree but you really become a stakeholder in this Department and stakeholder in this University, and with that role comes an obligation to give back in ways that you can and in ways that are important to you,” Witt said. “But it is really important in our view that Chemistry is able to continue to recruit, develop, and nurture, reward, and retain the best of the very best. So today we have a special opportunity to not only recognize the Department, but also Professor Doug Mitchell for what he has done. On a very personal level, Margaret and I would like to say congratulations, Doug, and our very best personal wishes.”

Professor Mitchell was selected for the professorship in early 2020, and his appointment began in August 2020. Restrictions on gatherings due to COVID-19 delayed the Investiture ceremony for the past two years.

Venetria Patton, dean of the College of LAS and professor of English and African American studies, said Doug has distinguished himself through his outstanding research and teaching, mentoring and working with countless graduate students, postdoctoral researchers, visiting scholars, and undergraduate students since joining the University.

“Faculty like Doug bring groundbreaking research into the classroom. They involve many students into hands-on research allowing them to grow other skills and knowledge,” Patton said. “It’s impossible to measure the impact Doug has had and will continue to have on our students, on our university, and on our health.”

Bill Bernhard, executive vice provost for Academic Affairs, said investitures are an important part of being together and celebrating the intellectual community, and they offer an opportunity to reflect on our shared purpose and mission at the University of Illinois, which as a Land Grant Institution, means a responsibility to serve the community, state, nation, and world.

“And as faculty members, that means we have a special responsibility to engage in scholarship that addresses important societal issues and to train students from all walks of life to give them the skills, the knowledge, and the vision to become leaders in their communities and beyond,” Bernhard said. “Professor Mitchell’s research, scholarship, and teaching exemplifies this mission.”