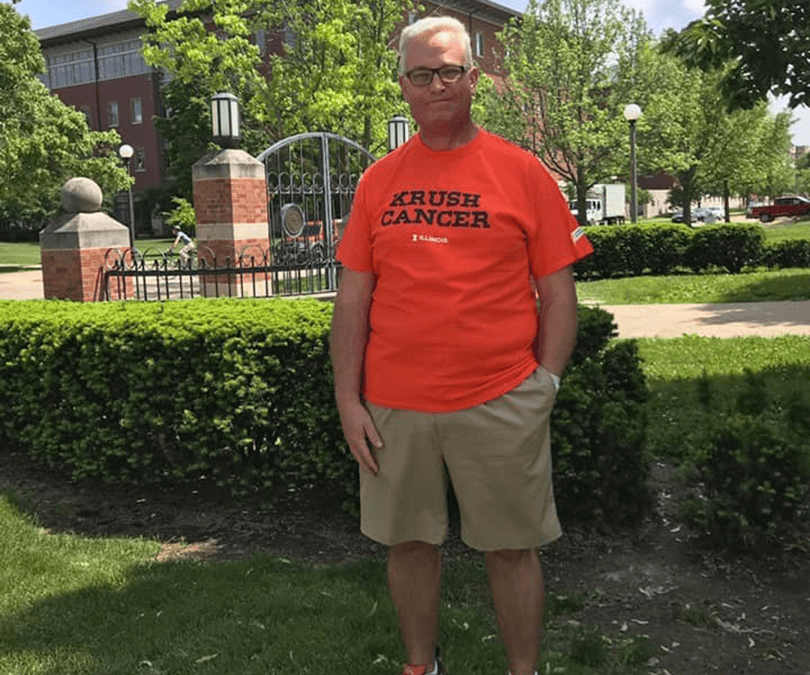 If you ask any one of Tim Oberg’s family members, friends, or colleagues to describe him, the first word that would pop into their head is, “Illinois.” And not just because he lived in the state, but because of his passion for his alma mater, the University of Illinois at Urbana-Champaign.

“My dad bled orange and blue … when my dad transferred to the University of Illinois, he fell in love with everything about it. He was their biggest fan,” Josh Oberg, Tim’s son, said. “He used to live in Snyder Hall, and he always pointed out where it used to be every time we would visit.”

Tim (ENGR,87′) traveled around the world through his work as an engineer, taking photos in front of global landmarks in his Illinois polo. He represented the University colors when attending his beloved White Sox games, “he said you could always find him in the crowd because he’s the big guy in the orange shirt,” Josh Oberg said. If you visited the campus with Tim, you weren’t leaving without a stop to his favorite campus icon, the Alma statue.

When Tim was diagnosed with aggressive tongue cancer (squamous-cell carcinoma) in Feb. 2019, even through the doctor’s visits, cancer treatments, and surgeries, his love of Illinois never diminished. Tim’s exceptional cancer care through Loyola University Medical Center, Edwards Cancer Center, and Rush Copley Medical Center led him to investigate what the University of Illinois was doing to fight cancer.

“We went down to visit the University after Tim found out the cancer was spreading, just in case. He wanted to see it one last time,” Lori Oberg, Tim’s wife, said. “He looked up the Cancer Center at Illinois, and we stopped by, and they gave us Krush Cancer shirts.”

During Tim’s battle, the Oberg family created and started selling “Team Tim” bracelets – the color? Blue and orange. They hadn’t forgotten their summer visit to the Cancer Center at Illinois in Urbana.

“My Dad said that he did not want any of the money we raised to go to him. He knew he wanted to donate it somewhere else, and when he found out about the Cancer Center at Illinois, he knew that is where the money should go,” Josh said.

“He knew that if anyone was going to find a cure for cancer it would be the researchers from the Cancer Center on the Urbana-Champaign campus,” he said.

“It was almost nine months to the day he was diagnosed,” Lori Oberg said.

In honor of their father and husband, the Oberg family recently donated the proceeds from their bracelet sales to the Cancer Center at Illinois. This funding will go directly towards funding cancer research.

“We donated to the Cancer Center at Illinois because he loved Illinois. Champaign-Urbana was his home away from home,” Josh said. “He wanted to donate because when he had visited the Cancer Center, he liked everything he had learned about it.”

The CCIL was institutionalized in 2018 under the University of Illinois at Urbana-Champaign’s Office for the Vice Chancellor for Research and Innovation (OVCRI). With over 75 members spanning 19 campus departments the CCIL is bridging the cancer and engineering-science continuum through technology and interventions.

Contribute to the next major cancer research breakthrough.

Donor support enables transformative research. It allows our imaging technology experts to provide doctors and patients with more efficient and visible cancer assessments. It offers our modeling teams the chance to dive deeply into the complex world of tissue and tumor microenvironments to better understand how to mitigate and treat cancer. It aids our scientists in creating individualized treatment plans for patients, improving cancer survival rates.