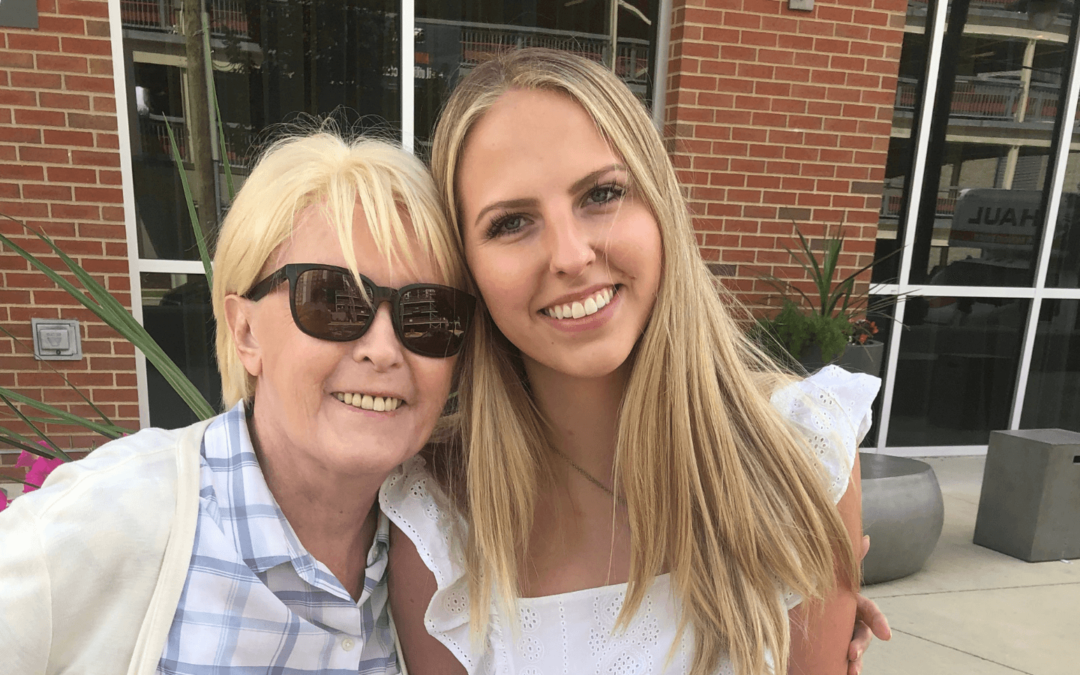 In this three-part series, the CCIL’s Communication Intern Carly Kwiecinski explores current outcomes for the disease, provides personal insight into her family’s experience with it, and discusses how the CCIL is transforming cancer care.

A small, six-inch-long organ tucked behind the stomach, the pancreas, is often overlooked until there is a reason to give it notice. It is an extremely important part of the body that plays a key role in digestion through the production of insulin and secretion of enzymes and other hormones.

Pancreatic cancer affects over 57,000 Americans a year, putting it on the top 10 list of the most commonly diagnosed cancers. Although it affects a large number of people each year, there is still much more to understand about the disease.

It’s been coined the “silent killer” because it is seldom detected at an early stage and difficult to treat. A combination of its location, vague symptoms, and the lack of standardized diagnostic and treatment techniques makes the diagnosis complicated.

However, according to the American Cancer Society, scientists are discovering more about inherited gene changes in pancreas cells that cause them to become cancerous. They are then applying this research to non-hereditary gene changes to help develop tests for detecting pancreatic cancer.

Treatment options are limited to the stage in which pancreatic cancer is detected. Surgery is the only true chance of controlling the cancer over a long period of time, but it is usually only an option for those with an early stage diagnosis.

Approximately 35% of pancreatic cancer patients who are diagnosed already have tumors that have spread beyond the pancreas (metastasis) and must look toward other options, such as clinical trials, for treatment. However, according to this journal article published in the Journal of Gastrointestinal Oncology in 2016, only about 5% of patients enroll due to a lack of communication on available trials. Patients who participate in these trials have better outcomes and are helping the overall fight against pancreatic cancer.

Pancreatic cancer patients are among some of the strongest and most resilient people. They know that their fight is not easy, but they have a chance. The Pancreatic Cancer Action Network states that are over 180 different pancreatic cancer clinical trials currently enrolling patients in the US. These trials are not a last resort, as many are open to those who have not yet received treatment. Patients who participate, no matter the stage in their battle, have the option and potential to access new experimental treatments or treatment combinations that might not be available otherwise. By being a part of these trials, people are fighting their own battle as well as the battle for future patients. Participation is progression.

PART 2 – PANCREATIC CANCER: MY PERSONAL EXPERIENCE AS A CAREGIVER

Cancer is no stranger to my family. All four of my grandparents currently have or have had cancer. However, my maternal grandmother’s diagnosis was different. I was used to the bad news and the worry that followed, but when my mom called me to tell me that my grandmother had been diagnosed with stage IV pancreatic cancer, my world felt like it had turned on its head.

My family had always assumed that because my grandmother was so healthy, she would live well past 100, so receiving such a serious diagnosis was a shock to us all. We were quick to rally together and figure out a pragmatic solution to honor the quality and quantity of life that my grandmother wished for. It was fight or flight, and we weren’t taking the latter option into consideration.

She was a fighter. She wanted longevity. Standing at 5’5 and 80 years old, she had the kindness and tenderness of the ultimate grandmother, but she possessed a wildfire within her. I was always fascinated by her resilience. She was going to do everything in her power to try to battle her diagnosis. This was my first time stepping up to the plate to help her because until then she had never needed my help; I had always needed hers.

We wanted her to live the rest of her life on her terms and we made it a point to communicate that with her. Caring for someone who is faced with a life-altering diagnosis is not easy, but whatever we could do to support her, we did.

I spent a lot of time with my grandmother at her appointments, viewing Chicago from a hospital room while reminiscing on memories. She would light up when we talked about trips we had taken and memories we shared from times before I could even remember. Even as her symptoms got worse from the chemo, she kept her spirits high by talking about how fulfilled her life was.

As much as there are good times and strides to celebrate, there are also hard times and lots of them. It is impossible to ignore when you are caring for someone. I felt confused, because as much as I was trying to support her, sometimes I needed support from her. Hearing her tell me that she was okay and that she was not going to give up brought me comfort. For the first time ever, she needed me more than I needed her.

A lot of people who have experienced pancreatic cancer themselves or have cared for someone who has been diagnosed with it know that clinical trials are an important resource. My mom would spend hours searching the internet for trials that could potentially take my grandmother and present them to the oncologist, but primarily due to my grandmother’s age and progression we kept hitting dead ends.

We refused to lose faith. Giving up was never an option. The doctors and nurses were amazed by her resilience. Sometimes, it was frustrating to see all the effort that was going into her treatment with little reward, but we held onto the deep satisfaction of caring for her the way that she had cared for us our entire lives. I want to make a point to express the power in knowing that you supported someone to the greatest of your ability and provided them with unconditional love in their greatest time of need.

When you are faced with something like this, there is nothing else you can do but to keep going. As a caregiver, the greatest gift you can give someone is your time. She was uncomfortable, but as long as she had her family near, she felt a sense of consolation.

There came a point when my grandmother could no longer handle eating, which was so hard for her because she loved to cook. She combated this in a reverse psychological way. I would lay next to her in her hospital bed and we would watch cooking shows, which would give her the satisfaction of eating as she would imagine the flavors of dishes being prepared.

As we got closer to the end, there were more bad days than good. The day that the end became not only a part of the picture but filled the entire frame. That day is still clear in my memory. Her oncologist, who she adored, came into her hospital room to talk about the next steps and suddenly broke into tears.

He told us that he had never had a patient at her age taking on a treatment with the strength that she did, but that he was sorry that he couldn’t do much more to help. My grandma had an effect on people that made them feel like they had known her for years. He knew she was a fighter; he struggled to put on a brave face on to tell her that there were no more steps. When I saw him cry, I knew that things were only going to get harder for her and for our family.

After all the experiences and travels that my grandma and I shared, I felt the most fulfilled as her granddaughter when I was by her side in her time of need. Grieving is a long process that starts before someone has even passed, but I feel comforted that my support meant everything to her and that it still means everything to me too.

I am immensely proud of my family and our close friends for pulling together to make her final days beautiful and significant. She meant a lot to a lot of people and her cancer never changed that. Her resilience lives on in everyone whose lives she touched.

PART 3 – PANCREATIC CANCER: HOW THE CCIL IS CHANGING CANCER CARE

Research is where transformations in cancer treatment begin. CCIL members are at the forefront of development and discovery to ensure a better future in cancer treatment, detection, and techniques. As a science research institution, the CCIL’s goal is to transform the entire field of oncology for the benefit of all patients.

Cancer researchers do not also work directly with patients but knowing that their research could positively impact someone’s life is a huge motivation factor. The CCIL’s Associate Director for Shared Resources, Joseph Irudayaraj, has the unique opportunity to work with clinicians at Carle Foundation Hospital while he conducts research on diseases and cancer, including pancreatic cancer.

“Several Carle clinicians are very interested in our research, which is nice to know because they are in direct contact with the patients. Clinicians can identify areas of cancer that they think need more efficient diagnoses and treatments, and such unmet needs provide motivation for scientists to work harder and make things possible,” said Irudayaraj, the Founder Professor in Bioengineering. 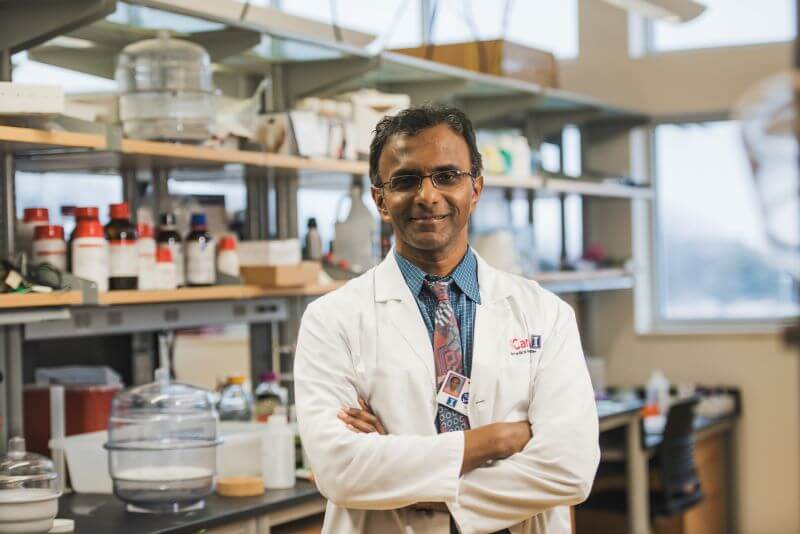 Irudayaraj’s lab is among the few who have taken on the understudied field of pancreatic cancer research. In collaboration with Carle physician Kevin Lowe, Irudayaraj is trying to find a link between patients’ responses to therapy in relation to epigenome and microbiome. Through his research, his lab is tackling one of the major issues with pancreatic cancer – the lack of early diagnostics and standardized therapies.

“We are asking ourselves, ‘What are the key trigger points, and how early can we detect these?’ If we can identify a set of biomarkers, we can hopefully come up with better treatment regimes. The ongoing partnership between the Cancer Center at Illinois and the Carle Foundation Hospital to identify the epigenetic and microbiome trigger points is an opportunity to address this gap in research,” Irudayaraj said.

The Cancer Center at Illinois has a unique opportunity to directly impact the quality of life by working closely with the Carle clinicians through enhanced research with patient perspectives.