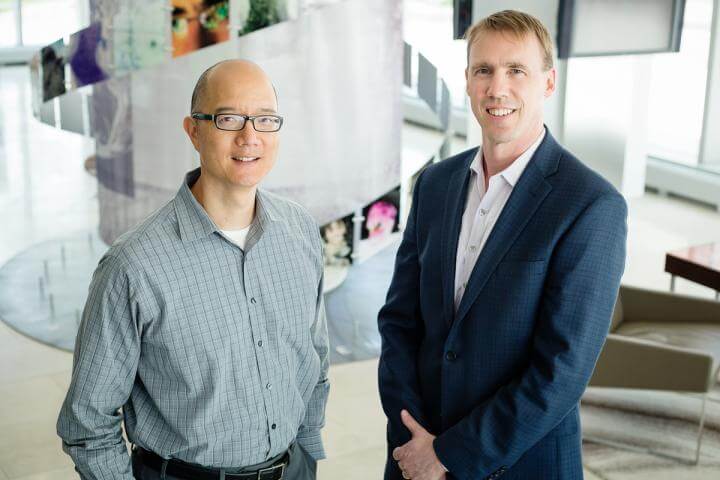 Urbana, Ill. – Cancers that begin in the brain, or start elsewhere in the body and spread to it, are notoriously difficult to treat. Illinois researchers in Cancer Center at Illinois labs are looking to improve those odds by developing better therapeutics.

The trouble with treating brain tumors is in part due to the blood brain barrier (BBB), which keeps foreign compounds out of the brain via a process called efflux. Briefly, drugs might be able to enter the brain initially, but are pumped out rapidly via efflux transporters such as P-glycoprotein. One such drug includes dabrafenib, a drug that is used to treat cancers including metastatic melanoma by inhibiting BRAF, an oncogene that encodes a protein which plays an important role in cell function.

A recent paper published by CCIL scientists Paul Hergenrother and Timothy Fan studied the features that enable efflux evasion, and attempted to embed those features into dabrafenib, which cannot penetrate the BBB. Aya M. Kelly, first author and student in Hergenrother’s lab, led these efforts and developed a new compound, everafenib. Matthew Berry, a student from Fan’s lab, also contributed to the study.

Everafenib evades BBB efflux and the research showed that the new drug is much more successful in treating stereotactically-implanted melanomas in mouse brains, compared to dabrafenib. The team is hopeful that these findings suggest everafenib will also be highly effective in treating metastatic brain melanoma in humans.

“We’re always optimistic about the clinical possibilities, but it’s hard to know. For a basic science paper and team, it’s exciting just to show it is possible to develop a systematic way to get a drug into the brain and treat a cancer,” Hergenrother said.

Dabrafenib has been used to treat metastatic melanomas in the past, but with low survival rates. Thus far, there has been no alternative; everafenib may provide an opportunity to increase therapeutic efficacy in these difficult-to-treat diseases.

“Tim and I both know that treating brain tumors is a huge challenge – we’ve been working on treating them in pet dogs and are continuing to develop one of our previous compounds for humans. We’ve had a long-standing interest in this desolate landscape, and it leads us to this work – to assess what can work and get into the brain,” Hergenrother said.

Everafenib was created after the group found that two chemical features are correlated with the evasion of efflux: the addition of a carboxylic acid group and a lower molecular weight. Everafenib also achieves a higher absolute concentration in the brain, meaning higher concentrations of the drug are retained in the brain, increasing the chances of successfully treating a cancer.

The researchers believe that there is a possibility that these features could also be successful in adapting other compounds to increase their BBB penetrance and efficacy in the brain.

“The discovery of these physical and chemical characteristics that have the potential to open up the door very broadly across different molecules and have anticancer efficacy in brain cancer, but even more broadly to diseases of the central nervous system,” Fan said. “Small molecules that can get in and treat diseases in the brain is the beauty and promise of this research. The possibility of these modifications and our understanding of how molecule size affects efflux broadens our horizons.”

Paul Hergenrother is Deputy Director of the Cancer Center at Illinois, and a Professor of Chemistry, and Affiliate in Biochemistry, and the Kenneth L. Rinehart Jr. Endowed Chair in Natural Products Chemistry. Timothy Fan is program leader of the CCIL’s Cancer Discovery Platforms research program and a professor of veterinary clinical medicine.