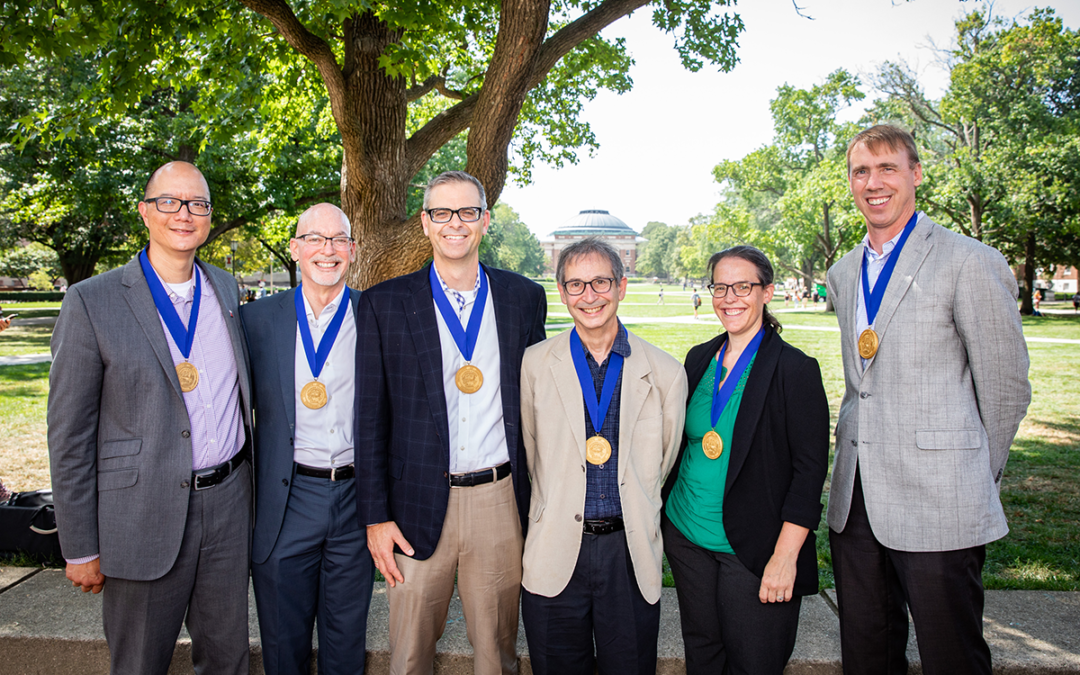 Urbana, Ill. – University of Illinois President Tim Killeen on Monday honored 28 key leaders of the system’s COVID-19 response with the Presidential Medallion. The medallion is the highest honor that the system president can bestow.

In a ceremony at the University of Illinois Urbana-Champaign (UIUC) attended by Gov. J.B. Pritzker, Killeen honored leaders behind the development of the SHIELD test-and-trace system and subsequent organizations created to expand its use beyond the system’s universities. Also honored were the leaders of clinical trials for vaccines at the University of Illinois Chicago (UIC), the first conducted in Chicago, and a mass-vaccination effort at UIC that has inoculated hospital staff and patients, students, faculty and, so far, tens of thousands of members of the public.

“I have never been more proud than I am today to recognize these colleagues and their leadership, said Killeen, awarding the first Presidential Medallions in his six years as president. “Their ingenuity and dedication and the hard work of thousands of their colleagues across the U of I System have saved lives on our campuses, in the surrounding communities, and well beyond. Their efforts have demonstrated in real time what the U of I System means to the people of Illinois and ensured that our response to the pandemic has been unlike that of any university system in the world. These initiatives are reflective of the power of the U of I System as a real force for innovation, positive change and the public good.”

Pritzker praised those honored Monday for their service to the state of Illinois and its residents.

“In our fight against COVID-19, the efforts of the University of Illinois System have been a real asset to millions of Illinoisans,” Gov. J.B. Pritzker said. “That begins with the successful effort last year to keep campuses open to the more than 90,000 students enrolled at U of I System universities. But it extends to the tens of thousands of people who found access to life-saving vaccines in the Chicago area, students at universities and community colleges who have been protected by the SHIELD test, and this fall to students at more than 1,000 K-12 schools around the state who will be protected by access to SHIELD. I am deeply grateful to the leaders being honored here today and to the thousands of others who have been part of the U of I System’s aggressive and ongoing response to the pandemic.”

Those receiving the Presidential Medallion for their roles in the U of System’s response to the pandemic are listed below.

The SHIELD test-and-trace system includes the non-invasive, fast and reliable saliva-based test as well as the companion mobile application to deliver test results, all developed at UIUC. The test has been successfully used since the summer of 2020. SHIELD Illinois was created to share the SHIELD system across the state. The test is now in use or being launched at numerous other colleges and universities, community colleges, public community testing sites, private companies and – thanks to funding from the state – more than 1,000 K-12 schools. Shield T3 was created to spread the technology outside of the state, and it is in use at a number of other universities, in school systems in Baltimore and Washington, D.C., and at private companies and other organizations outside Illinois. In all, well over four million tests have been administered.

UIC has been a trial site for two national clinical vaccine trials, including the first trial conducted in the city. The trials matched the diverse demographics of the city and included strong representation of groups that were have been particularly affected by the pandemic. UIC and its academic health enterprise, UI Health, led an effort that vaccinated health system workers, and opened Chicago’s first mass vaccination site in February 2021 at Credit Unit 1 Arena, offering vaccines to the public as well as its own students, faculty and staff. UI Health continues to offer multiple clinics and other access for vaccinations in the city, and a team of student volunteers has been used to proactively schedule vaccination appointments for patients, focusing first on neighborhoods hardest hit by COVID-19. UIC is also conducting ongoing research on vaccine hesitancy.

The Presidential Medallion is given to recognize individuals who support and bring distinction to the U of I System; enhancing and accelerating its ability to deliver on its mission in profound ways. The award is bestowed solely at the discretion of the president.

Previous recipients include Shahid Kahn, a UIUC alumnus who owns the Flex-N-Gate company, the NFL’s Jacksonville Jaguars and English soccer team Fulham F.C., in 2013; civil rights leader Myrlie Evers, also in 2013; members of the Tuskegee Airmen, in 2007; and Thomas M. Siebel, UIUC alumnus and the founder, chairman and CEO of C3.ai, in 2001.